Triple negative breast cancer (TNBC) is the most aggressive type of breast cancer, found in 15-20% of all cases. These breast tumors are enriched in a rare population of cancer cells, called cancer stem cells, which are responsible for the high rates of metastasis, resistance to chemotherapy and tumor recurrence. There are very few biomarkers for this cancer type and, there are no proven treatment options to combat it. New hope is on the horizon, thanks in part to research led by senior author Dr. Jean-Jacques Lebrun, Professor of Medicine at the McGill University Health Centre Cancer Research Program. In the study, published in Nature Scientific Reports, Dr. Lebrun, working with McGill colleagues Dr. Suhad Ali and Dr. Meiou Dai, found that the expression of cyclin-dependent kinase (CDK4) gene was higher in breast cancer tumours when compared to normal tissues, and was at the highest level in aggressive tumours of the TNBC subtype. They also identified CDK4 to serve as a potential therapeutic target to combat TNBC tumors. 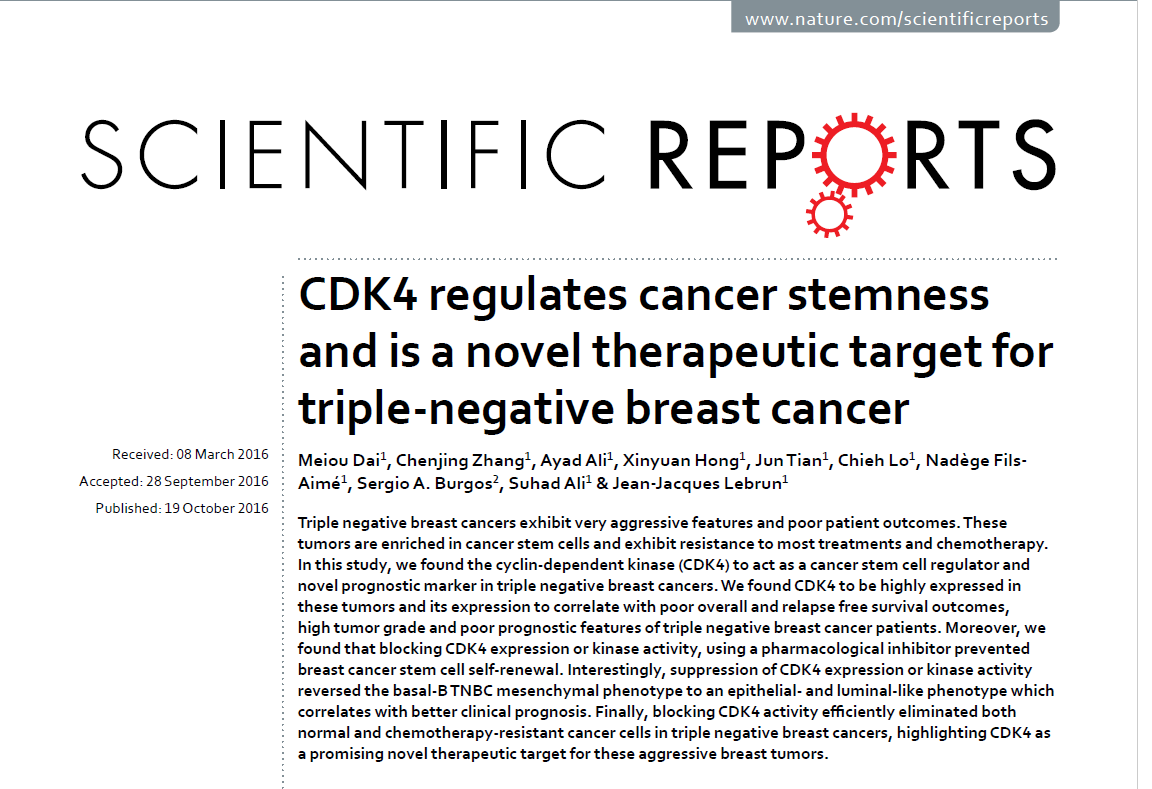 “Our study highlights new roles for CDK4 in regulating cancer stemness and as a novel prognostic marker in TNBC,” says Dr. Lebrun. Because the TNBC tumours are enriched with cancer stem cells – cells that utilize their self-renewal ability to generate and persistently propagate a heterogeneous tumor which results in metastasis and cancer relapse, while also displaying resistance to chemotherapy causing cancer patient death – targeting these cancer stem cells is a priority for the development of novel therapies that could efficiently target TNBCs.

CDK4 and its binding partner cyclin D1 are the ultimate targets of many oncogenic signals, suggesting a central role for these proteins in cancer development and progression. “We previously found that cyclin D1, a CDK4 binding partner, functions as downstream of TGFβ signaling pathway to regulate metastatic processes including cell migration and invasion of TNBC” explains Dr. Dai, the study’s first author. “This prompted us to then investigate the potential role played by the cyclin D1 partner, CDK4 in breast cancer progression.

We performed a bioinformatics analysis of CDK4 in breast cancer, and interestingly, we found that CDK4 expressed at the highest level in TNBC tumors and correlated with poor prognostic and early relapse-free survival outcome.”

Using the Pfizer CDK4 inhibitor “Palbociclib”, which is FDA approved in combination treatment with aromatase inhibitors for hormone-responsive breast cancer and is currently in clinical trial, the researchers discovered new functions for CDK4 in regulating cancer stem cell differentiation and chemotherapy drug resistance in TNBCs.

This study was conducted with funding support from the Canadian Institutes for Health Research.